A paper by Julia Schuetze and Rebecca Beigel will be published in spring. In this publication, the two authors explore how cybersecurity policy exercises can be used effectively to deal with different challenges in cybersecurity policy. They describe different types of exercises and how they can be used in the policy domain, for example when testing the policy response options to a cyber operation.
▬▬▬▬▬
In the coming months, Kilian Vieth, as part of the GUARDINT team, will research how well media and NGOs in Germany, France and the UK are able to investigate and question intelligence surveillance. For this purpose, surveys will be conducted to determine, for example, which financial, personnel and legal resources journalists and NGOs have at their disposal to deal with surveillance. It will also be assessed which possibilities for exerting influence, such as investigative research, legal actions, campaigns or lobbying, exist and which journalists and activists consider to be particularly effective.
▬▬▬▬▬
Finding information online and correctly interpreting news is a challenging task. How capable are German adults to deal with these challenges and how competent are they? This is the question addressed by the comprehensive study that Anna-Katharina Meßmer and Alexander Sängerlaub will publish together with Leonie Schulz from the opinion research institute pollytix in mid-March. The study is based on a survey and a test with which the digital news literacy of adults was measured representatively for the first time. In addition to the evaluation of the results as a paper, there will also be a web app that can be used to test one's own digital news literacy. The data generated in the survey will be made accessible to enable other researchers to continue working with it.
▬▬▬▬▬
The use of artificial intelligence in our society must be transparent and trustworthy. Testing and auditing procedures can help with this. Leonie Beining is currently working on how this can be achieved in detail as part of the ExamAI project. The focus is on the challenges and difficulties that will arise in the practical implementation and control of such procedures. Based on this, practical scenarios and proposals are being developed on how such AI testing procedures can be successfully implemented in HR management and industrial production.
▬▬▬▬▬
Aline Blankertz published a paper in February 2020 in which she shed light on the potentials and limitations of data trust models. Now she is devoting herself to this topic again in order to take a closer look at some questions that are still not clearly answered in the debate about data trusts: In doing so, a paper will use four use cases to more clearly define what data trust models can do and what regulatory framework is appropriate for them. It is already becoming apparent that the respective answer will differ depending on the sector or purpose.
▬▬▬▬▬
Digital policy issues will play a more prominent role in this German federal election campaign than ever before. Whether it's administrative digitisation, broadband expansion or digital education – the COVID-19 pandemic has at the same time ruthlessly exposed the policy failures of recent years. In view of the poor record, the question of why things are simply not going well in digital policy in Germany is of great importance. Stefan Heumann thinks the debate about a digital ministry is misguided. He is currently concerned with what we should be dealing with instead of departmental responsibilities and ministry organisational charts, so that the ambitious goals from the election manifestos can finally be successfully implemented.

What we are reading

Continuous rumours spread that data protection undermines the effectiveness of the Corona app. When asked, however, no one can say exactly what this damage would look like or what would cause it. A volunteer research team has now demonstrated in a very creative way how interesting research projects can also be built on the data protection-friendly setup of the Corona warning app - decentralised and cheap. Even if the results remain incomplete, the experiment shows that we can still learn a lot, for example, about the role public transport plays in infection chains. Read by Kilian Vieth.
▬▬▬▬▬
The semiconductor industry is currently receiving a lot of political attention, but the details of the business models, dependencies and production steps within this industry are complex and convoluted. The podcast "Broken Silicon" devotes an episode to this topic. In it, Daniel Nenni, the founder of SemiWiki, who can look back on many years of experience in the semiconductor industry, is interviewed. He explains very clearly the development of the (US) semiconductor industry since the 1980s and especially the relationship between and mutual dependence of chip designers like Apple, AMD or Qualcomm and chip foundries like TSMC or Global Foundries. He also goes into the reasons why you have to choose between TSMC in Taiwan and Samsung in South Korea if you want to manufacture state-of-the-art logic chips (processors, AI accelerators, etc.). By Jan-Peter Kleinhans.
▬▬▬▬▬
The Media Authority of North Rhine-Westphalia has translated this manual (PDF download link) into German and published it. It is a booklet designed for journalists, but also relevant for interested non-specialists. Based on articles by international experts, it gives an overview of different forms of "information disorder" and explains how disinformation can spread. It also includes tips on how to do good fact-checking online - for example, how to verify images or examine social media profiles. This international expertise is a real treasure trove of explanations and hands-on techniques that are now finding their way into German-language discourse. Read by Anna-Katharina Meßmer.
▬▬▬▬▬
The products of the surveillance company "Circles" can spy on calls, text messages or the location of mobile phone users worldwide. According to Circles, they are mainly sold to nation states and exploit vulnerabilities in the mobile phone system so that the device does not have to be hacked to be monitored. Citizenlab, an institution of the University of Toronto, has now published details about Circles and its customers in a report. They were able to identify 25 countries that are likely Circles customers, including Australia, Belgium, Estonia, Guatemala, Israel, Kenya, Nigeria, Serbia and the United Arab Emirates. This report shows how dangerous systemic vulnerabilities can be and how important it is to regulate the sale and use of these or similar products - especially to protect individuals and groups of people who are particularly vulnerable because of their profession or ethnicity. Read by Rebecca Beigel.
▬▬▬▬▬
In the book "Dark Territory. The Secret History of Cyber War", author Fred Kaplan describes the historical development of cyber security policy in the USA. Kaplan is a journalist specialising in military and security issues and was awarded the Pulitzer Prize for his reporting. In "Dark Territory", he particularly emphasises the role of bureaucracy for US cybersecurity policy and the influence of representations of "cyber" in films for political decisions or agenda setting. Read by Sven Herpig.

The Australian Competition and Consumer Commission (ACCC) is attracting attention with a particularly confrontational course towards the big platforms. The EU has introduced two major legislative packages with the Digital Services Act and the Digital Markets Act, but is taking a more moderate course compared to Australia's push. Aline Blankertz will discuss on Thursday, 25 February at 08:00 with Rod Sims, Chair of the ACCC, what the experience of Australia's confrontational course is and which instruments could also play a role for EU platform regulation. You can register for the event here.
▬▬▬▬▬
As part of our work on intelligence oversight, a new database is now available online in the GUARDINT research project. It serves as a digital collection point and open source archive for documents related to intelligence surveillance and oversight. The full-text searchable database compiles legal foundations, control reports and court decisions from France, Germany and Great Britain. Corresponding tips on how to use the database are explained on about:intel.
▬▬▬▬▬
The Infodemias of 2020 - How this year will change the debate on disinformation (background discussion): In December, Julian Jaursch spoke with Professor Heidi Tworek about the changes in the debates on disinformation. You can listen to and watch the entire conversation.
▬▬▬▬▬
After a long consultation period, the European Commission has drafted new legislative proposals that redefine the rules for the internet. Aline Blankertz and Julian Jaursch analyse the upcoming EU legislation on the Digital Markets Act and the Digital Services Act in Brookings Techstream.
▬▬▬▬▬
Our expert Pegah Maham was portrayed in detail by the Tagesspiegel. Her approach and work as head of the Data Science Unit at SNV are featured. Pegah was also interviewed for the Mercator Foundation's magazine "Aufruhr". 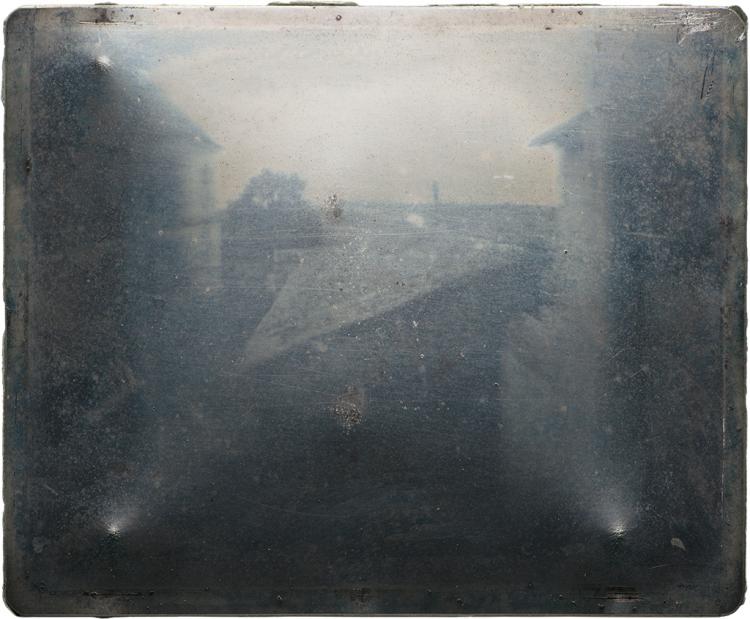 This perspective is becoming more and more familiar after months in the home office: This shot through the window to the outside is the oldest surviving photograph in the world. In 1827, Joseph Nicéphore Niépce took it with a camera obscura. Niépce is not only the inventor of photography, but together with his brother Claude he also developed the "Pyréolophore", the world's first combustion engine. The two were successful inventors but lousy businessmen: they both died completely impoverished. Found by Johanna Famulok.